END_OF_DOCUMENT_TOKEN_TO_BE_REPLACED

In the world of e-commerce, the internet-bred mushroom product retailer Four Sigmatic is making a killing.

You may have never even heard of Four Sigmatic unless you’re a fun guy or gal who’s into the whole healthy superfood scene or you listen to Tim Ferriss’ podcast.

They also aren’t as large as some of their food industry competitors who are trying to break into the Shroom Boom. But only 7 years after operations, this Danish e-commerce company is generating a whopping $60 million in estimated annual revenue with these marketing tactics.

But that’s not all:

In only 3 years of operation, the company launched in the U.S. and relocated its headquarters to Los Angeles. Their products are now sold in over 65 countries including retailers like Whole Foods, although their global expansion was only made possible through e-commerce.

That’s why I’m going to show you some of the marketing tactics their smart founders used to get to this level of growth in the hopes that you can get inspired and implement them in your own e-commerce business.

Create Content that Provides Value Upfront to Build your Tribe

Four Sigmatic has been able to generate a lot of traffic with almost 90% of it coming from purely organic means with little paid search investment. Moreover, over 40% of their total traffic is acquired through direct search.

Although Four Sigmatic does run product ads that push for the sell (we’ll dig into this in Marketing tactic #3), the majority of the content they put out is educational in nature and aims to provide value upfront.

One of their top performing pieces on social is an article which educates on the best foods for brain health. Obviously, mushrooms are on that list!

In order to have leverage over your audience, you need to provide value upfront. This allows you to build a community and most importantly, trust. Only after providing your audience with value can you push for the “ask” or sale.

With only 24 uploads, Four Sigmatic’s Youtube channel has over 2 million views.

These statistics aren’t extremely impressive in themselves. But because Four Sigmatic sells a product that people don’t generally have knowledge of, it’s crucial for the company to have a knowledge hub where they can educate their customers.

Unsurprisingly, their top videos are the ones that focus on educating people about fungi. This video has over 300,000 views. That’s quite a lot of views for a video on shrooms.

The video content Four Sigmatic puts out on Youtube not only establishes them as a thought leader in the world of mushrooms, but it also generates them a ton of traffic (64.21% of their total social traffic), as shown below.

How much are Four Sigmatic spending on creating video content?

It’s impossible to estimate the size of the budget they have allotted towards video content, but from watching their videos, I can safely assume that they aren’t splurging.

This doesn’t mean their videos are of low quality. They deliver on exactly what they intend to.

I would argue that Instagram is the most suitable platform to build a brand and drive sales for any e-commerce company. I’d argue further that ads on the platform are actually still under-priced. Marketers are quickly catching on. Instagram now has a billion monthly active users and is a significant source of revenue for Facebook that is projected to become their main revenue source 2020.

For a brand selling mushroom products, Four Sigmatic is killing it on Instagram and Pinterest. They’ve executed their marketing strategy extremely well on these platforms.

What makes these platforms so effective?

What is Four Sigmatic doing to fully exploit these platforms?

Their earliest post is from early 2014. Undoubtedly they had the advantage of capitalizing on the platform when it was in its infancy and wasn’t nearly as saturated as it is today. 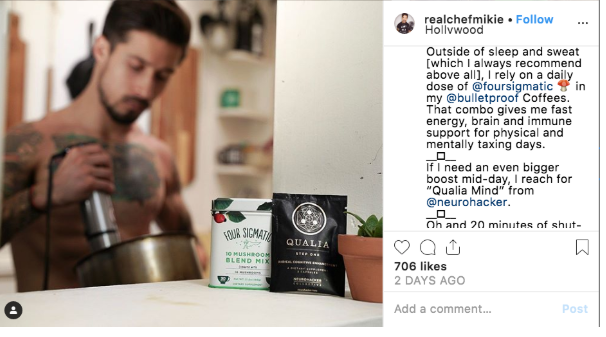 If you check the “tagged” section in Four Sigmatics Instagram page, you’ll see that they’ve been tagged in countless photos. This content is created by both users and influencers.

The influencers and affiliate partners that Four Sigmatic works with aren’t only on Instagram. Here are the criteria for eligibility to become an affiliate partner taken from their website:

Nowadays, there are a ton of people who have 5,000+ followers on social. This allows a lot of people who are fans of Four Sigmatic to come on as affiliate partners. Having a huge network of affiliates is the equivalent to having an army of micro-influencers.

What is the most effective way to sell stuff?

Word-of-mouth. Imagine having a huge network of fans that not only love your product but also have incentives to sell your product by receiving benefits. What are the benefits? 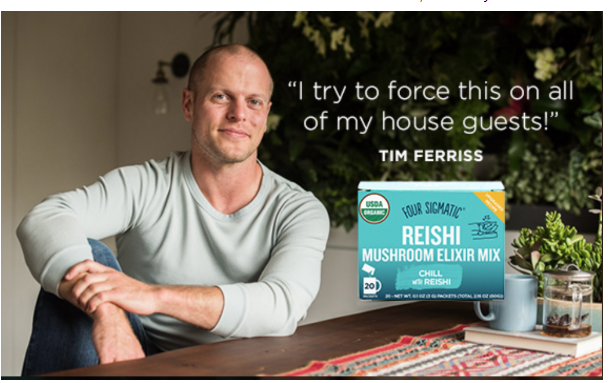 If you haven’t heard of Tim Ferriss you’ve been living under a rock.  He has multiple New York Times bestselling books and his podcast is one of the most downloaded podcasts of all time.

Tim has major influence over a large, loyal audience that is highly engaged and ready to take action. When he endorses a product, people flock to buy it. On Gary V’s podcast, Tim mentioned that his shout-outs have damaged start-ups in the past due to them being unable to cope with the huge influx of customers.

This is the Tim Ferriss effect. Before the Internet era, it was called the Oprah Effect. But in the digital age, Tim has taken up that mantle.

How much does it cost for Tim to endorse your product on the Tim Ferriss show?

About $54K per episode to be exact. And he asks for a minimum of 3 episodes to start. So unless you have $100K+ in your budget to allot, don’t bother. If you do and it’s a make or break for your business, you shouldn’t bet on Tim (as he himself has said).

But what’s the ROI of sponsoring Tim’s podcast?

Mizzen+Main founder, Kevin Lavelle, has a brilliant piece published on Medium in which he explores four strategies he used to boost exposure and sales.

Which would you use?

Kevin tried all four, and this is what he had to say: “Sponsoring Tim Ferriss’ podcast has been the greatest single decision I’ve made in an effort to grow Mizzen+Main.”

Now, not everyone has the budget to sponsor Tim Ferriss’ show, but the major takeaway here is:

These days, it’s not uncommon for retailers looking for VC funding to act like tech companies. Not many VC’s are willing to fund retail and e-commerce companies, but if you say you’re a direct-to-consumer e-commerce business focused on subscriptions, you’re actually talking about how you’re focused on tech.

Apart from the increased attractiveness of receiving funding from VC funds, the major advantage of creating a subscription-based service is the monthly recurring revenue stream that can act as a major source of revenue.

What incentives does Four Sigmatic give their subscribers?

One of the most successful referral programs is Uber’s. It allowed them the expand into 50+ countries within 3 years. We won’t get into the specifics of their referral program, but for customers, Uber was initially giving $30 for every referral. Nowadays, they only give $5.

Let’s face it - $10 might not seem like a very strong incentive. But can add up to something significant when you consider that there isn’t a limit to how much a referrer can earn. Moreover, it’s still substantially more than most companies give.

Marketing your business can be fun when you see results. See results and have fun with these 7 key takeaways from Four Sigmatic:

We Tried 6 Alternatives to OneSignal. Here's Our Feedback

It looks like you have tried OneSignal and it doesn't meet your needs.[...]

22 Best Practices For Publishers Starting Off With Podcast Marketing

The audio medium is on a boom. It has surpassed the wave of videos and[...]