END_OF_DOCUMENT_TOKEN_TO_BE_REPLACED

Android 13 ‘Tiramisu’ has made its presence felt with permission prompts for app notifications. Until now, Android app developers could seamlessly send notifications to their users, unlike on iOS where permissions are the rule of the game. This offered Android apps the unfettered privilege to slide into your notification tray and make an appearance every now and then. Given that Android formed the dominant slice of the mobile pie, the larger audience base was served to developers on a golden platter.

One lesson developers didn’t quite pay heed to, is that “with great power, comes great responsibility.” After exploiting the ability to flood notifications, things got a teeny weeny bit out of hand. As user experience began to get impaired, Google took notice. To begin with, users never approved to receive notifications. Besides, not everyone’s diligent enough to figure out precise settings that govern app notifications and then disable them on their device. As a result, app uninstalls increased. Android 13 app notifications build on the approach launched with Android 11, where app permissions were automatically reset if left dormant for long.

Android 13 will ensure a better user experience by putting users in control to either “Allow” or “Don’t Allow” notifications. Users of any app that displays notifications on Android 13 will see this prompt, even if the app has not updated to the latest version.

User actions available and what each means for you

Users can take one of three actions when prompted

This is the consent offered by the user to be a part of the app audience and start receiving notifications every time one is pushed.

In this case, the user has declined to offer consent to receiving notifications from a particular app. App developers could probably nudge the user a second time and try to convince them into seeing the value of notifications.

Basically, the user has selected neither allow nor block and has swiped off the notification prompt. If the user is on v12 and lower and has not explicitly disabled receiving notifications, then you are eligible for a temporary grant. This basically means that a prompt can be shown at a more convenient time.

What does Android 13 mean for app developers?

The massive shift with Android 13 app notifications has left developers with several unanswered questions. Should they even go ahead and ship out an upgrade? Who will the prompt be visible to? Will existing users see this prompt as well? And several more.

Upgrade your app to Android 13

Users on Android 13 will see a prompt if they keep sending notifications and do not upgrade to Android 13. This creates an unpleasant user experience and might lead to users declining to receive notifications from you. Ensure that you have upgraded to the new version and show them what value they will receive if they subscribe to the push notifications rather than the prompt being plastered as soon a user downloads the app. Upgrading to Android 13 gives you flexibility over when you want to display the prompt.

What happens to an existing app user?

Some devices pre-grant the new notification permission. For other devices, the system automatically allows notification permission temporarily provided by the app if the app is on Android 13. This means you will have the control to show users the prompt after showing them the value they can receive, and then choose when to show it.

Someone newly installed your app?

If a user is already on Android 13, the notifications are turned off by default. You are on the upper hand if you are already upgraded to the newest version as you choose when to show the prompt. If your app targets Android 12 or lower, then the user will be prompted to subscribe to notifications on app startup.

Upgrading your app to Android 13 ensures that the user is not shown a prompt on install. It is ideal to show them once users browse and get a feel of what the app has to offer. Let the users get familiar with the app before you ask them to subscribe to notifications.

See if they have interacted on the website - let's say they just shared an article on social media, subscribing to your premium publication, or read an article to completion. Probably someone has opened the app three times within a week or visited a particular category multiple times- tell them they will be notified every time something of their interest is published. The trigger could even be as simple as setting up an account. 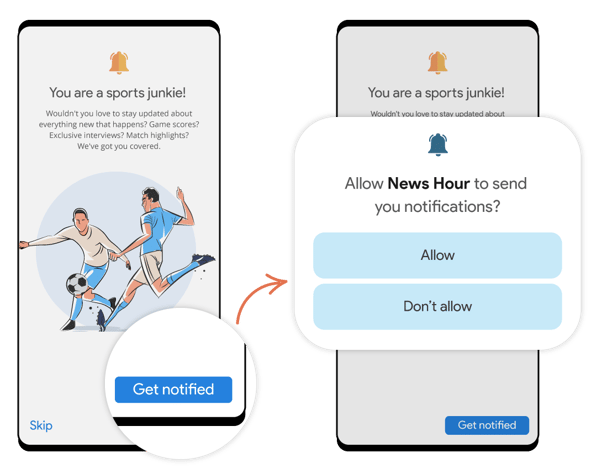 With Android 13, you need to start tracking how many have opted in for notifications and experiment with the way you have been asking them to subscribe. Build on top of it or strategize your way onto creating touchpoints that make them subscribe.

A soft push helps get users more context or even select the categories they want to receive notifications on and well you get lower decline rates. This however has not been explicitly mentioned by Google.

At Google I/O they covered extensively the second beta of Android 13 which is now released for testing and feedback. Visit android.com/beta to check out the partners and to get beta updates on select phones. You can expect it to realize by the end of 2022 or early 2023. So buckle up and keep things ready before the D day.