How to Stimulate E-Commerce Conversion with 4 Push Marketing Channels

How to Stimulate E-Commerce Conversion with 4 Push Marketing Channels

“Push marketing is dead.” You might have heard this a million times. Here is the truth, web push, email , SMS and app push notifications are NOT! You know what is dead? Spam.

The traditional push marketing channels like email, SMS, in app notifications and the new age web push are as hot as they could ever be. Every once in while, analysts would point out how email is not working any more and how open rates have hit an all time low but what they consciously skip is the factor of context. Push based communication  continues to be one of the most valuable weapon in the Marketer’s ammunition kit.

There  are three key drivers of personalization –

Communication  channels – including Email, Web Push, App Push, SMS are extremely critical to reach out to new users and drive customer acquisition. The choice of channel varies as per target audience but fundamentally, it all boils down to giving relevant information to the right people without sounding spammy.

There are 4 main channels for push marketing:

It has always been a head scratching moment deciding which channel suits best for you and which is the best channel altogether, but guess what? Maybe they all are like the different children of the same parents. Have a look at the comparison chart and you can decide it for yourself. 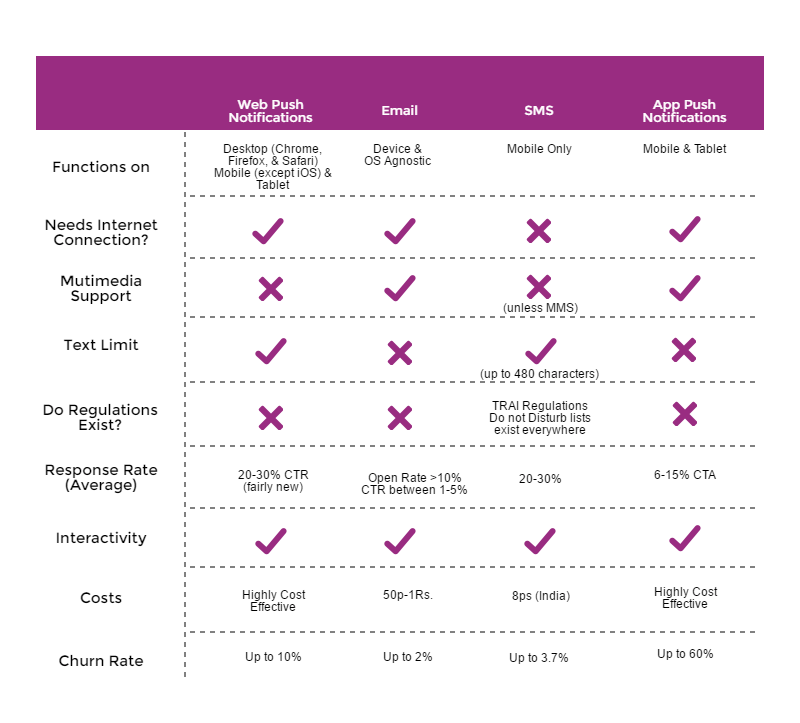 Now you might have a fair idea about the different channels, but let’s dig a bit deeper and get to know them one on one.

WEB PUSH NOTIFICATION- A REMINDER DIRECTLY IN YOUR BROWSER

It’s been quite some time now since web push notifications has started (14 April, 2015 to be precise). They have brought in a whole new phase to the marketing arena.

As the world is technologically developing a great amount of innovation has gone through web push notification. Web push was primarily introduced by OS X Mavericks and then Chome 42 started supporting push API. Since then Chrome has been evolving like never before; tweaking and experimenting, bringing forth improved and refined versions of web push.

Local time website push notification boosts user engagement and helps drive in repeat visitors. They are succinct and crisp notifications which catch your attention within seconds. The whole concept of web push is still new to the users. As for the marketers, they are investing big time as the had foreseen its potential.

Web push is widely used in the e-commerce sphere once they received humongous positive results as compared to other mediums. E- commerce thrives on gaining new visitors, engaging the existing ones and driving the users back to the site. Web push helps in notifying the users then and there about your brand, no matter what device they are using! With the invent of Progressive web apps, push notifications have become a major part for e-commerce websites.

Every marketer usually sends at least one email everyday. Though it has become an vital channel for marketing, it was used for military purpose when email was born. Initially email marketing wasn’t that popular due to lack of reach. Later on it went on to become one of the best channels to send elaborate messages. Emails have no text limit and one can easily send relevant information as attachments. 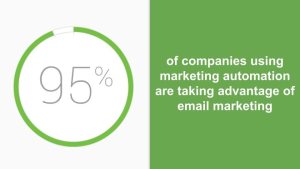 In 2001, the first user behavioral email was incorporated using targeted market products which were relatable to the user. In 2010, 48% of marketers are sending triggered emails according to the customers buyer journey. Now people have started using gifs and videos along with emails to make it more interesting and engaging. Drip marketing sends multiple emails to prospective clients and help in lead generation. E-commerce site use drip marketing to pull back customer to the website reminding them the about an abandoned shopping cart.

Traditional email marketing was all well and new; an opportunity to grab the user’s attention. And then spam happened. With your inbox filled with email that you didn’t want and at the snail’s pace in which internet worked back then it was a nightmare.

In the modern scenario, ‘permission emails’ are the way to go. In permission emails, the users give assent to send them emails related to your products or services. Here, as you can figure out, there is no scope for emails getting spammed. One can send personalised emails and re- engage with the users. Emails are best when you need a feedback or  to send a review.

However, emails solely depend on internet. While emails are used to send a good amount of detailed information, it’s not a good idea when people are in a hurry and they have to go through the entire mail to get the gist of it. It is not a good idea to send emails for notifying the user that your food has arrived or the arrival of your booked vehicle.

GETTING INTIMATE WITH YOUR CUSTOMERS VIA SMS

SMS (Short Message Service) started off in 1992 for customers. It was primarily used for personal communication and then later on moved on to promotional texts and for e- commerce endeavors after 1995. SMS has a limit of 160 characteristics and any message that crosses the limit is sent as another text message. Though it was thriving initially, people saw a decline as other modes of communication came by (like whatsapp and hike, but that again is not applicable for sms marketing).

SMS is a legitimate marketing channel that is used worldwide. SMS is personal and mobile friendly. In some parts of the world like India, there are some regulations regarding sending promotional SMS.

This provides an instant opportunity to give all the information you need to your users and drive them to your site. SMS is one channel that cannot be ignored by people as they have to manually delete from their inbox. The only problem that they are facing is that if the users place them on the DND (Do Not Disturb) list, then the users will not receive the messages. Now it has become mandatory to get the users consent to send them promotional messages. Sometimes links are embedded in a SMS, but the links should mobile optimised or it will lead to frustrated users, and that is definitely not a good sign.

In e-commerce website verification code or the OTP is sent through SMS. This is a secure code that authenticates the user. Companies like Ola use SMS to send confirmation message and details of the driver. It also encourages to users to open the app once again to locate the cab.

With the emergence of smartphones, the way we communicate has gone through a sea change. And then apps were invented to make browsing smoother and to enhance user experience. Marketer wanted to stay with users as long as they could and apps made it easier to do so. App notifications drove users back to the app encouraging the user to engage with the brand.

Push notification allow developers to notify users even when they are not active on the app. Initially e commerce web sites made a huge profit with in app notifications, driving users back to the app encouraging them to make some purchase with exciting offers and discounts. The app notifications  are more targeted and purposeful encouraging further user interactions.

It also so happens that many apps have huge user base, they aren’t active on the app. So to drive the user’s back app notifications play an important role. It increases involvement and build users interest. 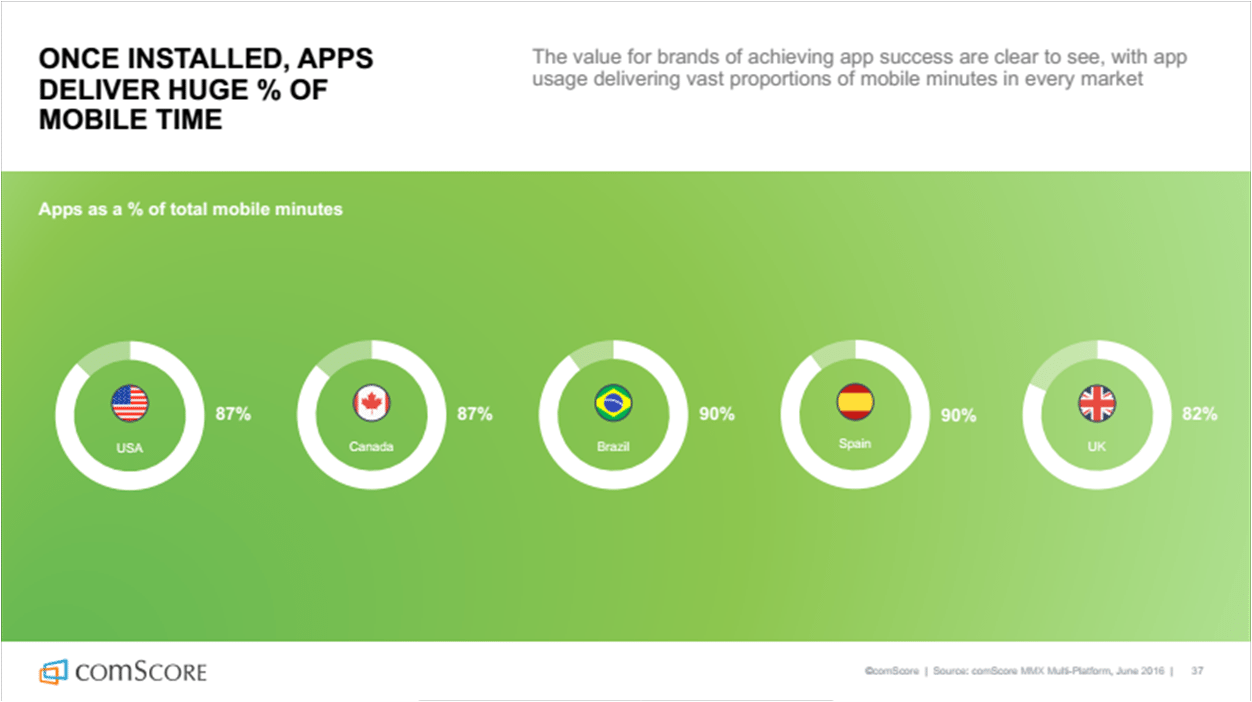 When it comes to gaming, apps are the best way to go. With the invert of progressive web apps conquering the marketing world second by second, it has now become possible to give the experience of both the app and the website. With active service workers, it also makes it possible to send mobile web push. The plight of being offline has been eliminated with PWA. It is also worth noting down that apps have to be made and maintained and it doesn’t happen free of cost.

All said and done, every channel has its own set of advantage and disadvantage, but it is still a crucial call to select the best. While some might not be a disadvantage for you, it might be for some. Like I said, it all depends upon the organisation you are running and which will suite you best.

Impeccable timing and optimal frequency at which you send should always be taken care of. Just make sure that you don’t overwhelm the user with numerous marketing tactics. Where every brand wants not just to survive but thrive, it’s a close call that you will have to make. In this myriad set of channels, putting one on a higher pedestal doesn’t mean anything. It is almost like comparing oranges to apples. Which is of course absurd!

This article was originally published on ecommerce-nation.

How To Choose the Best Hosting for Your WordPress News Website

Choosing a hosting platform is one of the most crucial steps while bui[...]