END_OF_DOCUMENT_TOKEN_TO_BE_REPLACED

There has been a drastic change within the digital advertising landscape. The rapid digitization of advertising as a whole has resulted in the formation of numerous businesses, each one offering a unique product or service that aids the overall online advertising process and adds value to the link between a publisher and an advertiser. These players are Ad Networks. With these new players in the ecosystem, the digital advertising model has evolved and is no longer the simple model of days gone by. It has evolved into a much more complex model.

It won’t be incorrect if I mention Ad Networks to be the last option leveraged for paid advertising. For instance, If an advertiser has a budget of $100 for digital advertising, she might plan to spend $70 via Google, $20 via Facebook, $5 via Twitter and only spend $5 or less via Ad Network.

In this article, I will try to broadly address how ad-networks function and how they have been able to drive growth. Before we start, here is a quick recap of digital advertising scenario.

The fact that Google and Facebook have maintained almost like a monopoly over the digital ad expenditure at a global level (barring China) is not new to anyone. In the first quarter of 2017, as much as 92 cents of every new dollar spent in online advertising across the Asia Pacific (ex. China) went to Facebook and Google. Of the $1.23 Bn in growth, $1.13 Bn goes to Google and Facebook. What is interesting is to understand how the remaining 8 cents are spent and spread across various platforms. The 8 Cents are primarily spread across Twitter, Linkedin, Native Advertising Platforms and Ad Networks. 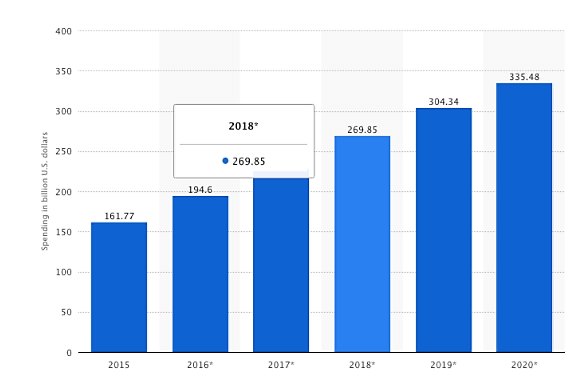 In the CPM model a publisher the the ad network for every 1000 ad impressions they deliver. CPM stands for Cost-Per-Mille, simply put Cost-Per-1000 Impressions.

CPC, also called as PPC advertising campaigns, is performance-based (to an extent). As per the model, publishers get paid for every click they deliver to advertisers, with impressions not having a bearing on the payment at all.

As the name suggests, this model is based on the number of views the ad captures. These ads are not normal text ads, but rich media ads including video and display advertising. The tagline and the ad copy play a crucial role here. Read this article for some quick tips to become a pro at copywriting.

The CPL model is entirely performance-based and takes into account qualified leads only. Unless and until all the criteria set up by an enterprise for lead qualification are met, number of impressions, clicks on the ad, landing page views don't matter.

CPS is another performance-based metric that an affiliate Ad Network would work with. This goes a step further and considers only the number of sales that took place via the ad campaign.

CPI is applicable only in case of apps. This model is ideal for businesses to leverage digital advertising to drive app installs.

Another concept that comes up in the case of app installs is the type of campaigns, whether the users are incentivized or not.

CPL, CPS, CPI can together be termed as CPA (Cost Per Action), which is the absolute performance-based model.
Publishers and advertisers often use ad servers (more on this later) to maintain their own reports and serve ads, using third-party ad serving tools or ad exchanges.

How do these Ad Networks function 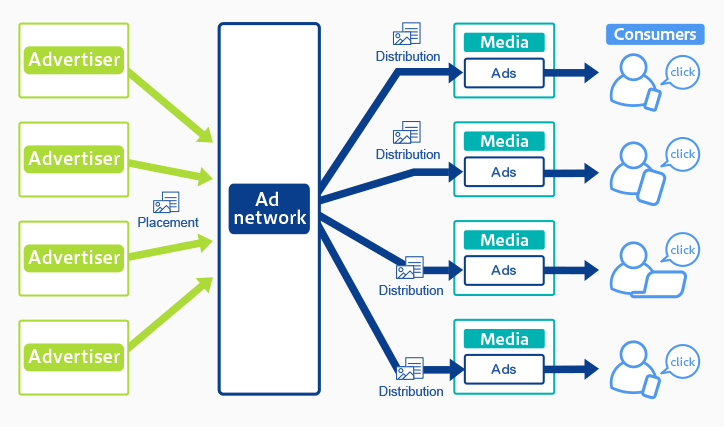 Ad network is essentially a middleman that connects advertisers to websites that host advertisements. To be more precise, this network seeks out unsold advertising space from publishers and then sells that space to advertisers searching for ad space with particular content. When you see interactive ads being served on various sites you visit, there is a specific technical process taking place that enables such. Every Ad Network’s objective is to aggregate publishers in order to provide advertisers with low cost ad space that can reach a lot of people.

Grow your website traffic and revenue by spending $0. Start generating additional revenue from Day 1. Get Started.

Who should work with Ad-Networks?

Ad Network is a conscious choice that is made by many advertisers based on the objective they are planning to pull off with their ad campaigns. Do they only want to let people know about their client’s brand (usually a case with brands) or are they trying to generate revenue and some more complex business goals for their clients?

How Ad Networks work with Advertisers

At the most basic level, ad networks pool inventory of unsold ads from publishers and sell it to advertisers. Ad Networks earn money by taking a cut of the total ad revenue or basis the performance that is delivered.
Ads are delivered to a publisher’s site by an ad network’s ad server via the code on the publisher’s site that calls the ad. The performance of any campaign is tracked via a tracking pixel from the ad network that the advertiser places on the conversion page (landing page) such as a thank you page on its site. The ad network’s ad server powers ad targeting, tracking and reporting on the campaign.
Unlike Google Adwords and Google Display Network where advertisers and agencies manage bidding, targeting and optimization themselves, many ad networks manage campaigns on behalf of the advertisers. In such cases, an ad network and a buyer can negotiate all the costs and parameters associated with the campaigns including and not limited to

Ad networks offer publishers an easy and convenient way to make money by selling space on a personal blog or another website. They link advertisers and publishers and offer a safe option for both to buy and to sell.
Generally, it costs a blogger or a publisher nothing to partner with a network and to implement a revenue stream. The network does all the work, from finding advertisers, to setting up campaigns, targeting and collecting money. The network taking responsibility of these parts of the partnership leaves the publisher with time to create quality and relevant content, which is necessary to bring in revenue.

There are broadly 3 types of Ad Networks

Looking for avenues to improve your top-line? Monetize your subscriber inventory with iZooto. Generate additional revenue from Day 1. Get Started.

The AdTech ecosystem has been plagued with challenges related to transparency. Everyone in the ecosystem right from Google, Facebook, Snapchat to small ad networks have been under the radar at one point or the other. The fundamental rule that every advertiser expects and every publisher wants to adhere to are:

There are over 500+ ad networks that operate with Indian advertisers and publishers. While this is a great number and gives publishers a lot of choices, given the issues around transparency, it is increasingly difficult to differentiate between these Ad-Networks. This is the problem that is faced by both advertisers and publishers and given the operational style of ad networks, this problem will continue to persist. From a publisher’s point of view, here are some of the factors governing the choice of ad network:

Affiliate businesses are laser-focused on delivering performance. Everything aside, performance or conversion rates heavily depends on the offer and whether or not that offer is exclusive to a publisher or not.

While publishers engage with multiple ad networks, they prefer allocating the bulk of their inventory to the ad networks who provide them with campaigns consistently.

Like everyone else, publishers prefer working with ad networks that present them with campaigns that last longer. This gives them an opportunity to optimize their delivery, plan better and essentially perform better.

One of the most critical criteria for publishers is payment terms. Payment terms with Ad Networks vary drastically depending on the campaign and the publisher itself. For select campaigns, ad networks offer advance payments to kickstart the campaigns but on an average, the payout period can vary between 30 - 90 days. This is where platforms like Google AdSense and Ad Exchange stand out. Google AdSense for instance processes payments in 30 days.

The above factors can help you choose between the two, However, the differentiating factors, in any case, would be the campaign objective and the target audience. If you are looking for acquisition then you can very well rely on Ad Networks. If you want to run branding campaigns, you can juggle between the two, but make sure you analyze all the factors associated with the two.

Above is an elaborate diagram depicting the functioning of Ad Exchanges. Here, what Ad Networks will do is turn this complex process into a not-so-complex one for advertisers as well as publishers.

Why should you choose or not choose to work with Ad Networks?

Ad networks have long been a core component of any media plan. While in the early days of online advertising, Ad Networks struggled to justify their existence, they now are welcomed in every major advertising budget thanks to their reach and scalability. Traditional ad networks can provide immediate results — and working with an ad network facilitates understanding of the marketing challenges, the ever-changing dynamics and the science behind driving greater value from online advertising. Moreover, the prolific growth in consumer-generated content/media has seen an increasing number of ad networks with varied models that take advantage of the mounting power of social networks. The available targeting with Ad Networks allows advertisers to constantly evaluate and refine the networks’ inventories based on which sites become part of influential and relevant conversations.

A dedicated client supportcavailable in case of Ad Networks is definitely something that tends to lure advertisers.

By taking care of all the ad elements, Ad Networks makes the entire advertising process less chaotic and more convenient for advertisers. All they have to do is to get in touch with the right Ad Network and share their campaign requirements.

A non-human traffic trend seems to be steeply expanding in this market which means that there is quite a good chance that you are being conned by the data that you see and hence wasting your advertising budget.

Ad Networks are often alleged to fabricate the generated leads. However, this happens mostly when you are using Ad Network with a bad name.

Cases of delayed payments towards publishers are quite common.

The bottom line is that there are Ad Networks that deliver great results and there are many that don't. It is recommended to do your research based on your objective and choose the right Ad Network for your business.
*If you think some data is missing or needs to be changed, feel free to get it touch.

We Tried 6 Alternatives to OneSignal. Here's Our Feedback

It looks like you have tried OneSignal and it doesn't meet your needs.[...]

22 Best Practices For Publishers Starting Off With Podcast Marketing

The audio medium is on a boom. It has surpassed the wave of videos and[...]