END_OF_DOCUMENT_TOKEN_TO_BE_REPLACED

Owning and renting - which makes you feel more secure, be it in any context? You have to agree when I say that being more in control makes you reach your objectives and goals quicker. And Kolkata Knight Riders, an IPL cricket team, learnt it the hard way. They have a thriving digital presence on Facebook with years of engaging and interacting with people to build a community. And touching 15 million followers is no joke.

This was a blow to the team at KKR. This is betrayal they could not cope with. It was a painful yet a much needed breakup. And that was it for KKR to start focusing on audience development that would forever remain with them. No one to rely on, no one to take charge from, just full control of the audience that belongs to them to reach out to when ever they want.

It is time. Start owning your audience

Put yourself on the driving seat. It time to stop being bossed around. Start building your audience and reach out to them whenever you want to.

Only when you engage your flybys can you convert them into a loyal user. And for engaging users you need to have a marketing stack that compliments your marketing strategy. With the right marketing stack you can strive for audience development by understand the audience behavior, their interest and then reach out to them with relevant messages.

What is audience development?

Audience development encapsulates a lot of things from audience building, audience engagement, converting them into a loyal subscriber base and encouraging paid subscription.

3 factors why publishers find it hard to engage with users

As a part of our audience development efforts, I speak with digital publishers, content creators, editors, bloggers on a daily basis. The only commonality in all these conversations is their constant struggle to engage users.

That’s when I started digging deeper to understand how did publisher land a spot between a rock and a hard place. The three factors sum up this situation -

Chasing traffic, gathering a bag full of optimization tricks, creating fresh content to rank above the peers - somewhere became all in a day’s work for publishers. And, amidst the chaos, publishers failed to achieve the one thing that actually would’ve made a difference today, audience development to build a loyal user base. In their defense, they did strive towards audience development - fans who liked articles on Facebook, hearted their photos on Instagram, retweeted their tweets on Twitter. But, they never really got to own their audience. Simply put, Ownership means - setting up a direct communication channel. Most publishers today have marginal or no ownership of the audience they serve. The absence of which drags down their only chances of ever having a metered paywall. What they own is where they invested their efforts at - Traffic.

With walled gardens pretending to be a friend, majority of the publishers didn't think much about investing in audience development. Those who did and continue to do are now able to sustain themselves better than their peers. Meet Buffer and Guardian - who have been able to convert their users into paying customers and a thriving community. It helped them forge a relationship with their audience that kept their subscription counter ticking.

This bit is disappointing. Editors work like a beaver on the editorial plans, testing headlines for articles, writing in-depth op-eds, bring in breathtaking facts but all this becomes a wild goose chase when the distribution of content gets limited to Facebook and Google AMPs (Accelerated Mobile Pages). Again going back to the first point, because the audience exists in a pre-packaged form on Facebook and Google, publishers barely make additional distribution efforts.

Knowing that both Facebook and publishers share the same target audience, the same revenue goals, and still treating them as a friend in nothing but a mistake. Publishers have been silently witnessing the algorithm tweaks altering their share of revenue. Study conducted by Parse.ly on 600 publishers said there was a 25% decrease in the referral traffic from Facebook (includes facebook.com and Facebook Instant Articles). Putting all eggs in one basket is not a strategy that you should be building your business on. 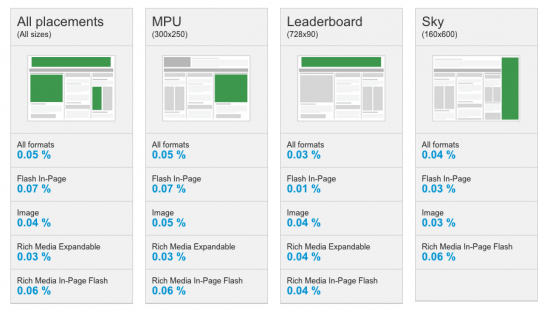 These are the average CTR’s for Display Ads on Google Adsense. The average CTR’s on Facebook ads across industries is 0.9%. A number of factors have driven this decline - but all said and done, display ads are hardly a growth area in digital media. More and more publications are considering the subscription route but the movement to a subscription-based yet ad-free model is a model that is yet to evolve.

To engage users effectively, publishers need to realize the importance of owning the audience and strive for audience development.

Chrome first rolled out the web push API in April 2015 and since then businesses - commerce, saas, publishers have flocked towards this channel. Why?

Because web push notifications get delivered in real-time, hence, unlike email, help publishers engage with their users anytime, anywhere. Notifications are interrupting, sure but that’s a topic we will cover another day.

Build and Own Your Subscribers

Subscribing to web push notifications is a matter of one click. No forms, No personal details. Very little friction. The underlying idea is simple - if your visitors find your content valuable, present them with a simple ask - To subscribe to your notifications. They don’t need to necessarily commit - it’s just a click away. Given the notoriety of push notifications, a question that gets asked more than often is, what is the percentage of users who actually subscribe to notifications? The answer usually varies between 3-5%.

For a website with 100K unique monthly visitors, here is how the subscriber growth would look like: 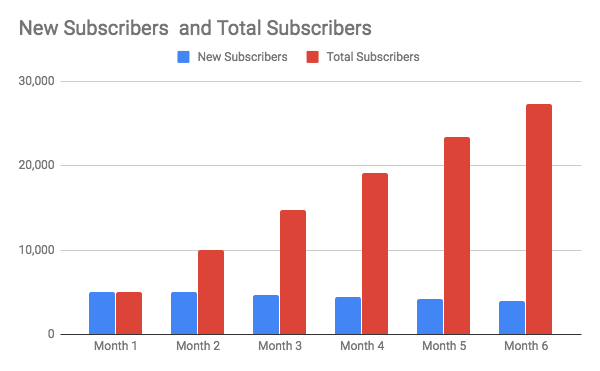 Sounds promising? This is exactly what Pricebaba focused and in less than 18 months have been able to build a push notification subscriber list of over 1Mn.

As your audience starts building you can kick-start engaging them with well-timed personalized notification delivering content that delights them and more importantly, drives repeat traffic to your website. The best part - because you own the audience, you get 100% control on who gets what content. 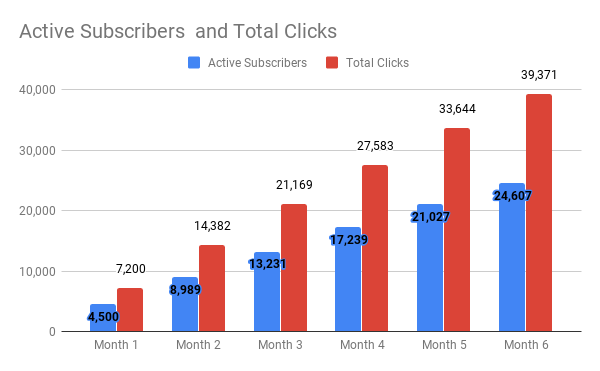 So, update users with what’s new on your blog, breaking news, and what not - all in just a few clicks. Push Notifications now contribute up to 20% of the total traffic for publishers - reducing their overall dependency on Facebook and Google. Also, this incremental traffic directly results in incremental ad revenue. Win. Win. 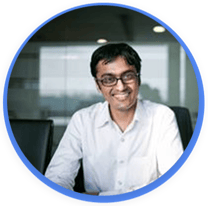 Google and Facebook fortunately or unfortunately are platforms which publishers have to depend on for traffic generation and monetization. As publishers we need to create long term loyalty driving products with the help of newsletters, notifications, other innovations (At Bloomberg|Quint we have a news service on WhatsApp with over 400k subscribers and drives over 7-8 million PVs a month). For publishers in the long run a loyal audience is the only way to have a larger control over traffic and monetization."

And it doesn't have to be web push notifications alone. There are many channels when leveraged strategically, can help in amplifying the reach of your content. Read this post on content amplification to learn about all the other techniques as well.

How Do Web Push Notifications Operate?

Web push notifications can only be used by websites operating on HTTPS protocols. Currently, these notifications are provided by six browsers:

Whenever a visitor lands on a website, a default browser prompt appears to seek permission for the subscription. The permission prompt contains an “Allow” and a “Block” button with a message quoting - “website domain name” wants to send you notifications. Visitors that hit the Allow button gets added to your subscriber's list and become a consented receiver of site's notifications. You can go through the checklist, to see optimum results, before pushing out notifications

For Chrome and FireFox, developers are required to register service workers on the browsers to ensure the notification smoothly gets delivered to the subscriber. Safari uses web push IDs as it does not support service workers.

Understanding The Anatomy of a Push Notification

Web push notifications are clickable pop-up messages that are shown on a device/desktop. These carry a full-blown package of information that comprises of a: 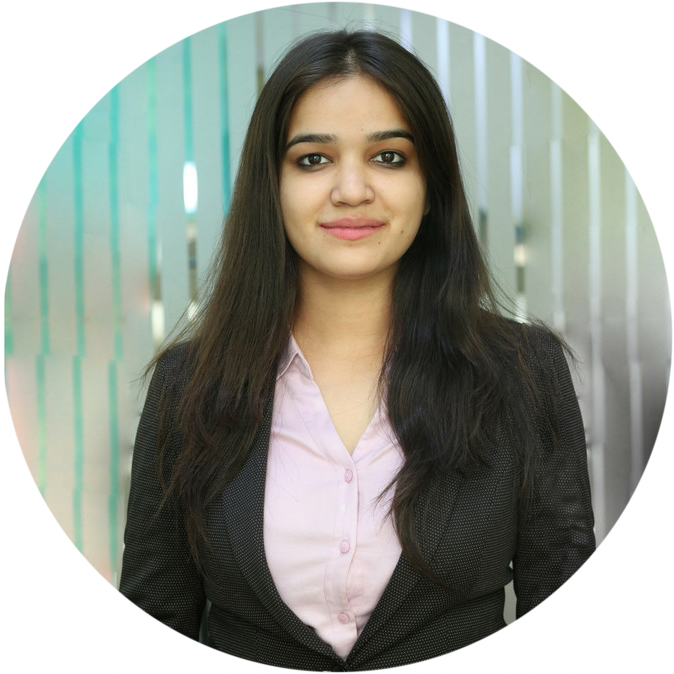 Neha is a Product Marketer @iZooto who works with a single focus of helping publishers grow faster and better. Coming from the lap of Himalayas, she is a theatre artist, who loves dropping gears to travel the mountains. When not in office, she can be found roaming in the streets of Delhi finding next good cafeteria to eat at.