Publishers Need To Relook At How They Perceive Marketing

END_OF_DOCUMENT_TOKEN_TO_BE_REPLACED

Publishers Need To Relook At How They Perceive Marketing

Last week, I had an interesting conversation with a few friends. Besides common interests, we also happen to work closely with the publishing industry. Initially, I thought this was a straightforward discussion. The publishing industry isn't as complex as rocket science, I thought to myself. But as each of them began talking about the pain points they faced, a pattern began to emerge.

Although not as dramatic as the plot of the 1957 cult classic 12 Angry Men, I resonated with a lot of those pain points. I jotted notes because I've had similar discussions with publishers in the past. I’m reproducing those notes here and would love to hear how you view the evolution of the publishing, news, and media industry. It's insights like these that help me engage better with teams at iZooto and publishers to ensure we build better products.

Turbulent times, despite being an Audience-Led vs Audience Driven industry

This was one of the highlights of our discussion. And it really hit me hard, but come to think of it, for every publisher out there, the sole priority is their reader. They live and breathe thinking of readers day in and out. I can’t think of any other industry that is so obsessed with user sentiment. Content production and distribution are largely led by what users want, what are they reading, or who they follow on Twitter.

They typically relied on a rather opaque ad tech ecosystem that prioritized third-party cookies. With that universe coming to an end, publishers are understandably anxious. This brings me to the next challenge plaguing publishers.

Who addresses the First-Party challenge?

Digital publishing and advertising go hand in hand. Yet, there’s no distinct example that comes to mind from the publishing space where the first-party challenge has been addressed effectively. It isn’t surprising then that any change made by platforms such as Google sends the publishing industry into a quandary.

The use of third-party cookies for advertising or the decision to deprecate it on the Chrome browser is a case in point. The industry has been discussing possible solutions for over 2 years now and most publishers have little clarity on what to do next.

If you have insightful views and publishing experiences to share, write for the iZooto blog. For more details, read our content guidelines here.

As our discussion progressed, it was evident that despite its focus on audiences, the news publisher business differs on so many counts from successful consumer brands. This by no means implies that publishers suddenly double down on focussing on revenue over the content they create.

However, publishers need to be more consumer-obsessed than they currently are. Besides, the general use of web analytics, the use of behavioral research, and deeper tracking of reader (consumer) journey would help build new products that appeal to specific audience segments. That would be the first obvious step to future proof.

Also Read: News Paywalls Explained - How to Monetize Your Content

Overall, creating great content is the fundamental truth for the publishing industry. The natural correlation from another industry is creating a great product. For example, the automotive industry builds great cars. They innovate at all times. Yet, they conduct intensive user studies to factor in every concern that existing and potential customers have. They also crash beautiful cars! Each new version that enters the market solves earlier user concerns.

The publishing industry could benefit significantly by using audience marketing to build their first-party data. It needs an approach where decisions lean more closely on user validation rather than an insider view of user preference. In fact, this can even solve impending third-party concerns, a burning problem in the current ad tech ecosystem.

Publishers need to think about marketing over channels

There’s an urgent need for a holistic approach to marketing done by publishers. There is a huge opportunity to be where their audiences are and speak one consistent message, offering the same familiar experience that their audience expects from them.

This is in contrast to the current state of affairs where say a reader is impressed by great quality content offered by the publisher and goes on to find a different experience on another platform such as social media or even an on-ground event.

Newer opportunities to engage with users will constantly emerge. Besides web and app, new avenues such as email, WhatsApp, and Messenger could mean an untapped audience now consumes content - because that’s where they are comfortable.

Find these insights relevant? Head over to our Content Remarketing Playbooks for Editors.

Customer Over Readers Over Site Visitors

Among all the challenges that publishers face, not thinking about marketing in the true sense is the most fundamental challenge right now. When was the last time you saw the title of CMO at a publisher? It takes effort to recall.

In comparison, the first place any D2C brand or for that matter any industry today thinks is about reaching new audiences is marketing. Publishers don't think that way.

This is despite the fact that they enjoy the best access to digital every single day. They leave too much on the table - all despite the vast treasure of information and user loyalty that they have access to. When they are bringing in these visitors, they don't look at them as customers. They still just look at them as readers.

When publishers start looking at a visitor not as a reader and as a customer, it will initiate a mindset shift. That's when the title of digital lead changes to say a Head of Marketing. A customer-obsessed mindset will help publishers face turbulent weather more effectively.

Rent and Then Own your audience

The next obvious step for publishers would be audience ownership as a concept. That’s a huge gap in the industry currently. Publishers aren’t taking true ownership of their audience. They know very little about the audience they serve. This is evident from how the entire publisher ecosystem was shaken massively when Google announced the deprecation of third-party cookies. 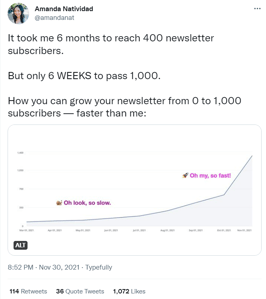 In her informative Twitter thread, Amanda Natividad talks about renting audiences. Publishers globally have been scrambling left, right and center to figure out their first-party data challenges. Unfortunately, in a world where there are tons of marketing solutions out there, nobody thinks of publisher-first marketing.

Success stories to learn from

It’s probably not by design, but traditionally, the publishing industry has always lived in legacy mode. But there’s hope. I do find inspiring examples of great turnarounds. My favorite is the New York Times. I recall during the 2008 crisis, US media was facing layoffs like most industries. Legacy newspapers such as The New York Times faced strong challenges. However, they made huge investments over the years in building their digital assets. At the end of 2021, it enjoys loyalty of 8.8 million subscriptions. To me, this is a story of education, awareness, and enablement.

In India, I would consider YourStory as a great example. It has managed to extend the same experience its readers expect with customized events that thrive around a loyal community. Niche sub-segments such as HerStory focus on success stories by women and are an effective use of segmentation. They have truly been able to set the marketing flywheel in motion.

Since we now live in the social media age, I can’t help but talk about Buzzfeed. We may agree or disagree on the content they create. But I must mention Tasty as a successful social media property that built a loyal audience irrespective of the BuzzFeed community. It went on to become a separate revenue-generating property. Publishers and the news media community specifically are looking at an opportunity to change with time, and build on the insights about their audience to grow. They don't have to think about social content or social first. They can continue to build on their strengths - their editorial voice that built audiences over several years. But they must enable newer means of discovery and engagement to stay relevant in the years to come. We want to see them grow because they're such an integral part of our daily lives.

Join over 10,000 publishers who share the same interest as you. Get engaging reads in your Inbox.

Join over 10,000 publishers who share the same interest as you. Get engaging reads in your Inbox. Hit Subscribe.