END_OF_DOCUMENT_TOKEN_TO_BE_REPLACED

If you would’ve asked me 5 years ago about AI or auto-generated content on a web page, I would have balked. We tried automating enough content on Pricebaba over the years but the idea never flew, even when it was done with human reviews and smart techniques. Of course, our focus at Pricebaba was to ensure good search engine rankings.

Plenty has changed since then. To begin with technology has come far enough for consumer SaaS companies to now offer intelligent AI solutions that can write just like humans. You may have heard about GPT-3 or the more visual DALL-E. The latter, for the uninitiated, makes computer generated images based on pure text input. As I write this article, I am asking my colleague to generate an image on DALL-E with the input being “30 year old man working on a laptop that is connected to a tv with hdmi cable in cartoon style”. Check out the result. 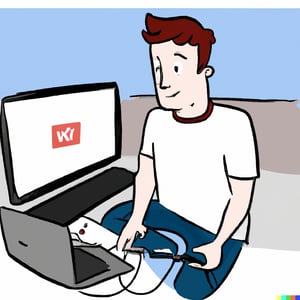 The short digression to show the prowess of AI aside, I, a conservative & reluctant SEO focussed webmaster, is now open to seeing what AI can do for content generation. But not from a view to game Google for good search rankings. At least not yet. During my debate with my namesake Mr. Ankur Pandey of LongShotAI, I talked about content that is much beyond the typical landing pages that we think in business context.

AI generated content has several use cases in my view that are beyond typical web content. And for some, it may be much better suited than typical human content. One example being writing or polishing descriptions of photos being put on a social app. Would I be okay if an AI assistant took a few words or sentences from me and described a social media post for me? Sure. Can an AI assistant help my mom convert her recipe into an article? Sure!

Another example can be the help sections of every popular app. If an AI can write the help section with multi-lingual tutorials on how to use my App and auto adapt to changing UI & features, that would be a huge saving of mundane & inefficient human effort that goes into this process. Content within apps doesn't have the same SEO implications that web content does. And I am sure, you the dear reader, would come up with better examples here to save mundane effort by humans.

As a webmaster, if i think about areas of my websites that would have been better written by an AI, I can think of plenty. In fact, in the quest to meet the conventions, often I have had web pages with text that could have been avoided. If we do not insist on discussing fully AI generated content pieces, several of my emails are reworded because Gmail does its thing and suggests better sentences. I can be lazy that way and more often than not accept the machine’s assistance. In fact, given the number of typos I make on Twitter, I hope Mr. Musk can get some of this magic to Twitter too.

Maybe apps looking for a news section to engage existing users would be okay with simple facts being stated by an AI news editor instead. But is that the right thing to do? Are there any arguments against this practice in general?

From an editorial standpoint, there are several ways to think about AI-generated content. Here are two of my considerations:

For a simple news piece stating facts or a daily digest, I think at least some users would be fine with an AI news writer. But opinion pieces? Debating global conflicts and major political events? Can an AI writer give you an opinion piece? I would be uncomfortable with that.

During my talk with Mr. Pandey of Longshot AI, we discussed how new recipes can be effectively produced by an AI. But does this pass the editorial considerations I mentioned above? We love to consume recipes that are given by folks who have been cooking & perfecting it themselves. Can an AI do that? Would you want to cook a recipe written by an AI? Most people would not. Unless maybe we gamify it and sell it as an app that helps you experiment with “AI generated recipes that match your preferences…”. Perhaps a smart marketeer someday will sell this concept to us and it might as well become popular.

These are early days of AI content. What hasn’t worked in the past is not necessarily an indicator of what the future may look like. AI-generated content on websites has been called out as SPAM by Google as recently as May 2022 and as a marketer I remain skeptical of its effectiveness. But we are already talking about an era where AI takes in text input and produces movies from it. We are going to have an increasing number of debates about AI vs human generated content in the coming years.

There might be a point in the future where we may not have such debates. How close are we to such a future? Should we test if my (& Google’s) belief about using AI content for SEO are already broken? I hereby propose a challenge to Mr. Pandey of Longshot AI about using his content engine to make landing pages with the intention of gaining SEO ranking. Two of my startup friends (Murtaza from Bizprospex and Himanshu from Obvious wallet) have agreed to let me run this experiment on content websites run by them. I look forward to reporting results in the coming weeks.

Annkur P Agarwal is an internet entrepreneur with a long history of content driven user acquisition. His current passions include video creation and web3. You can read his writings on his personal blog.

Instagram is one of the most popular social media platforms in the wor[...]

How to Build an in-house Video Team for a Newsroom