I hate ads. You hate ads. We all hate ads. In fact, people in advertising also hate ads. Now, imagine advertisers (they are also people like you and me, who by the way, also hate ads ) lining up to buy pixels on a page that has nothing but ads. These are advertisers who would generally place their content next to a NYT editorial but in this case, they were just buying ads. On 1 January 2006, the final 1,000 pixels on this page were put up for auction on eBay. The auction closed on 11 January with a winning bid of $38,100 that brought the final tally to $1,037,100 in gross. Yes, A million pixels sold for $1.03M.

This is the best way to define the Attention Economy. The first ad that was launched in 1994 had a CTR of 78%. Facebook’s Avg CTR in 2019 was 0.5%. Retaining attention is becoming difficult by the day and in this article, step by step I will breakdown how businesses - publishers, commerce, enterprises can prepare for the 2020’s.

So, what is the attention economy?

Attention is the holy grail that publishers have been chasing for over the years. The attention span of a digital individual is less than a second. To conquer this there have been various alternatives like Print Ads, the Million Dollar Homepage and Google, and Facebook. The belief has been that only attention is what is monetizable and the competition for attention is incredible today. People are trying to sell eyeballs for dollars. Your share of attention decides where exactly you would be in the value chain. More importantly, if there was ever a poverty line of attention, publishers would be right there, pushed down by the walled gardens of Google and Facebook.

Ben Thompson explains it very well using his aggregation theory. In the last 20 years as the world discovered the internet, publishers have gone through a myriad of changes. If there is one visual that sums it up - it is this. 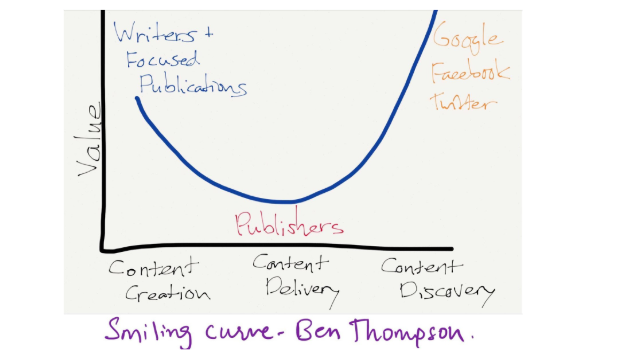 This is where organizations like iZooto come into the picture. As a part of our daily job, we help publishers reduce dependency on Facebook and Google. How? By using owned audience marketing.

Also, as a heads up on what we are going to tell you is really a collation of our internal discussions, memos, and presentations. Because we work very closely with publishers, it is our job to make calculated guesses at how the future will look like. This is what really drives our road map and helps us in building a product that adds value.

And over the last 10 months, we have been able to put together a neat framework for looking at this problem. What is the problem? The problem is the future of Digital Publishing.

We all have seen this GiGANTIC Martech infographic. 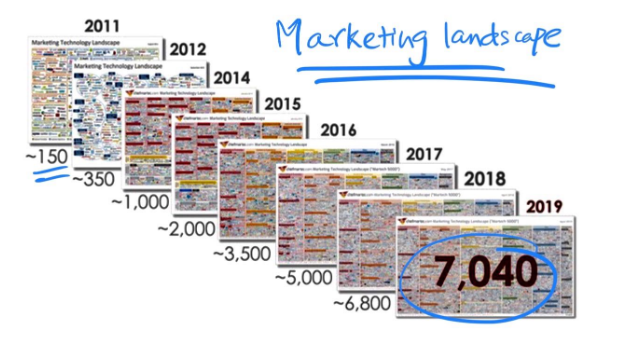 Before we get there, we want to give you some context. We are all aware of the GiGANTIC Martech Infographic. Earlier only 150 companies were in the marketing landscape, including Google and Facebook, but today in 2019, almost 7040 companies are a part of it. The growth has been exponential, but how many of these truly serve publishers? A small 436 only, majority of the ones catering to those in the display and programmatic ads. Everybody is trying to chase e-commerce, ignoring publishers.

With Google and Facebook sucking away all the growth dollars, 80% to be exact. It’s a duopoly exercised by them in the publishing world. Novelty and true impact at scale remains a question. The point remains that there are only a handful of folks in the industry who are even attempting to solve this problem. It is surprising but the real number of solutions that actually meaningfully serve publishers are actually only a handful. Let’s face it that AdTech is TOUGH. Investors simply run at the mention of this word. Again the problem is not AdTech. The problem is getting the spot back in the attention economy.

The future of digital publishing

Now before we get to the future, it is important to understand where we are today and why are we there in the first place. This is called Situational awareness. Once we have that, we can focus on the possible paths we can take to move forward and try to simulate some of those scenarios. We can then obviously talk about How What and most importantly When? 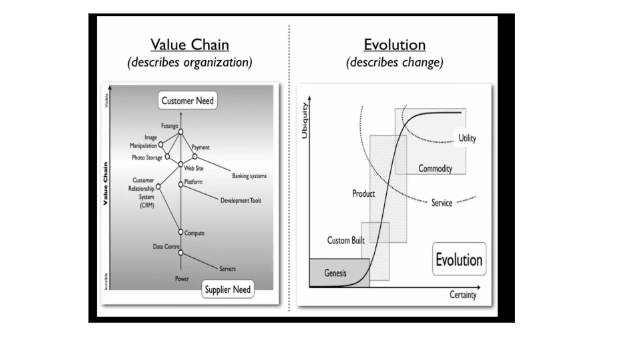 Wardley Maps are maps that define business operations. The mapping process holds the steps that give value to a product and also maps the way for evolution. It provides a landscape for the business to operate.

When combined together, we get Wardley maps that help us understand where the business is today and what is it that we need to invest in today.

We went all the way down to the pixel and here is what we found out. These are the types of visitors that consume content on a typical publisher’s site:

Exactly as their name suggests, they come and they go. These are readers who have come to your website, seen a thing or two, didn’t scroll much and left.

They are the ones who come back for their second visit. It could be because they liked something, or couldn’t finish an article earlier.

They are the ones who give you, ie., the brand permission to send updates. You send them notifications in the form of emails, SMS, push notifications, etc.

They love your content enough that despite hating the paywall, they open their wallets and give you their dollars.

The point to be made here is that if a brand has a paywall then it’s great and even if they don’t, it’s okay. This is what a typical split of users looks like, and what does the Wardley Map look like for these publishers?

If we look at the flow of reaching the end-user, it goes from having a reader, the working according to their attention span, allocation, audience building, to owning an owned audience. Allocation further divides itself into paid subscribers, having a paywall, a monetize plan to mediation.

The various elements are also divided into the genesis, which is the stage when something is discovered; custom, when things are custom fit for users; product stage, when it is being distributed and the various categorizations that come with it. The last is the commodity stage where it is readily available for everybody to use without any specific customization.

Here is a snapshot: 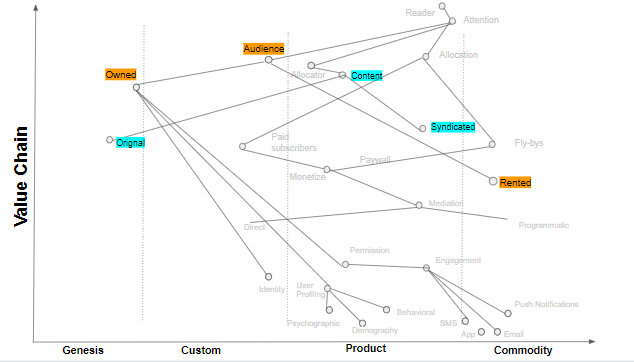 What is important is to understand how the movement of some of these components impacts the entire ecosystem and this will help us decipher where the opportunity lies for us. Check out how Simon Wardley explains the Wardley maps he created.

The story of 15M Fans

IPL is the Indian Premier League of Cricket. It is equivalent to Bundesliga is Europe or NFL in the US. The first IPL was in 2008. Kolkata Night Riders is a leading team in the IPL and they decided early on to go heavy on social media. Social media in 2009/10 was a really exciting place and they were early to cash in. They started building an audience there and in a time span of 9 years, build a FAN following on 15M followers. They obviously had to spend a LOT of dollars to build this audience.

In IPL 2019, they decided not to invest money but to cash in on their audience. Their objective - Let’s drive engagement by just posting aggressively on our fan page. Guess what happened?

What they considered to be their own audience, was actually rented from Facebook. Facebook made a lot of money there, and this is where the concept of audience ownership comes into the picture.

How is Google doing it?

This story is about Google’s 100B dollar business. Google continues to remain and thrive as an advertising business. Let us look at Youtube, which is the world’s second-largest search engine and see how google monetizes the massive attention it gets there. If you were to treat Youtube like a classic digital publisher then through advertisement and subscriptions, Google enjoys an 87% margin on its owned and operated business. As compared to Adsense (network business) margin is merely 31%.

How is Google managing its owned audience? Check it out here.

The impact that audience ownership makes is that it establishes a direct relationship with the end-user - which means that the end-user gave you permission to communicate with them. The end-user also gives you permission to track their behavior and collect their preferences as they consume content on your website. This data asset is what allows you to serve them contextual content and helps publishers build products that are hyper-targeted at you. Right from subscription to commerce.

We have already seen multiple revenue models being experimented within the digital publisher ecosystem. Right from Subscription Paywalls to Commerce, to growing advertising revenue across content formats such as podcasts and video content. Commerce just like Tasty from BuzzFeed. Paywalls like Newark Times and Newyorker. If there is one single component that single-handedly enables these revenue models, it is - Audience Ownership.

The owned audience is the most valued asset that digital publishing houses today can start investing in. What really changes when you own your audience?

Well, everything. Right from the metrics you track to the organizational structure.

Vanity Metrics such as traffic will start disappearing from the CXO Dashboards. To believe traffic numbers are not important because Comscore says so or because that’s how Media Agencies allocate their budget is not correct. The way advertising budgets are being allocated in media agencies and in brands is changing. And changing because of these simple reasons -

This is the exact reason multiple publishers after several quarters are reporting double-digit growth in their advertising revenue.

The future looks promising with digital publishing houses realizing the importance of audience ownership and beginning to build their own brand. Few things that would emerge out are:

The first step is starting to build your own audience, which is ultimately building your brand. You cannot build a brand without a loyal base.

Lesser dependency on the duopoly of Google and Facebook:

Instead of depending on platforms like Google and Facebook, brands would interact directly with their audience. This ensures a much better user experience, customized service, and lays the foundation for a better relationship.

Publishers must move forward and do not only look at advertising as a revenue model. The focus should be on diversifying and bringing out more revenue models.

A lot lies in store for the future of digital media publishing houses, the dependency on media giants like Facebook and Google would decrease enormously and marketing agencies would look towards catering more to digital publishing.

This is an excerpt from Vivek Khandelwal’s talk on the future of digital publishers at Digital Content Expo (DCX), IFRA. He is the founder and COO at iZooto and has over the last ten years, built products across advertising and marketing which have touched 100s of millions of users across the globe. As a part of his daily job, he works with digital publishers across the world, including media giants like Hearst Media, Tencent, to small and growing publishers such as PhilNews. He helps publishers get their spot back in the attention economy. 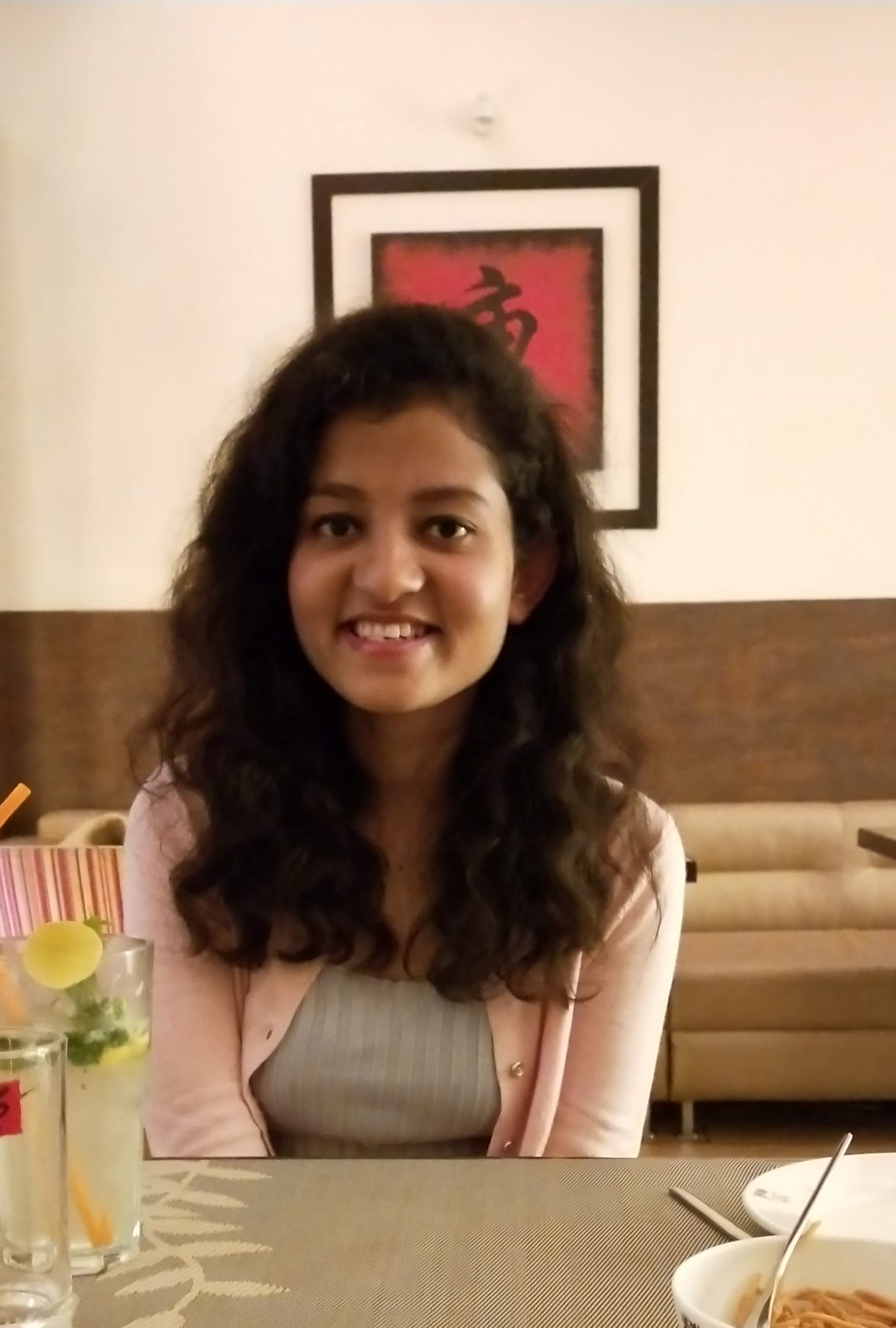 Shubhangi is a Content Marketing Associate @iZooto. A food enthusiast and always looking for new stories. She loves everything vintage and harbors a keen interest in theatre and performing arts.

“Most business models have focused on self-interest instead of user ex[...]

Live: Auto-create your notifications and make them more attention-grabbing

We all are pretty much aware about the decline in people's attention s[...]

Set up in Minutes! No Credit Card Required